In Helsinki, art belongs to everyone, which is why there are hundreds of works of art around the city. Helsinki Biennial will be the backdrop for the premiere of several new works of public art that will be put on permanent display in the city. “The Biennial in Vallisaari will also provide a stunning setting for presenting interesting and new public art,” says Taru Tappola, Head of Public Art at HAM and one of the two head curators of the Biennial.

Huge pink steel tentacles invite you to climb up or pose for an Instagram shot. The Swedish artist Jacob Dahlgren’s Early One Morning – Eternity Sculpture that appeared in the Kalasatama district of Helsinki in summer 2019 has been a source of considerable joy and inspiration to local residents and passers-by.

“Dahlgren wanted to create a space where you can rest for a moment or play. He clearly succeeded and his sculpture is a great example of new and fascinating public art,” says Taru Tappola, Head of Public Art at HAM and one of the two head curators of Helsinki Biennial.

You can find public works of art outdoors in parks, squares and schoolyards and also indoors in municipal buildings and health centres. The city’s collection of public art is managed by HAM Helsinki Art Museum, which is also responsible for acquisitions.

“All residents of the city are entitled to a good living environment, which is why HAM commissions new art on a continuous basis and places works in different districts of the city and in new areas as fairly and equally as possible,” Tappola says.

The percentage financing principle helps in treating different districts equally. Under the principle, roughly one per cent of the budget of all major municipal building and modernisation projects is used to acquire art. The principle has been in use in Helsinki since 1991, and the City Board re-adopted the principle in 2011.

At the moment, there are some 3,500 public works of art in various indoor and outdoor locations in Helsinki and 450 of them are accessible around the clock.

According to Taru Tappola, Helsinki observes the principle in a very commendable way and is in many ways internationally admired in this respect.

“Helsinki has taken an active approach to art and culture and its different municipal divisions co-operate exceptionally well. There is a strong will to promote the role of art. In other cities private funding plays a much bigger role.” 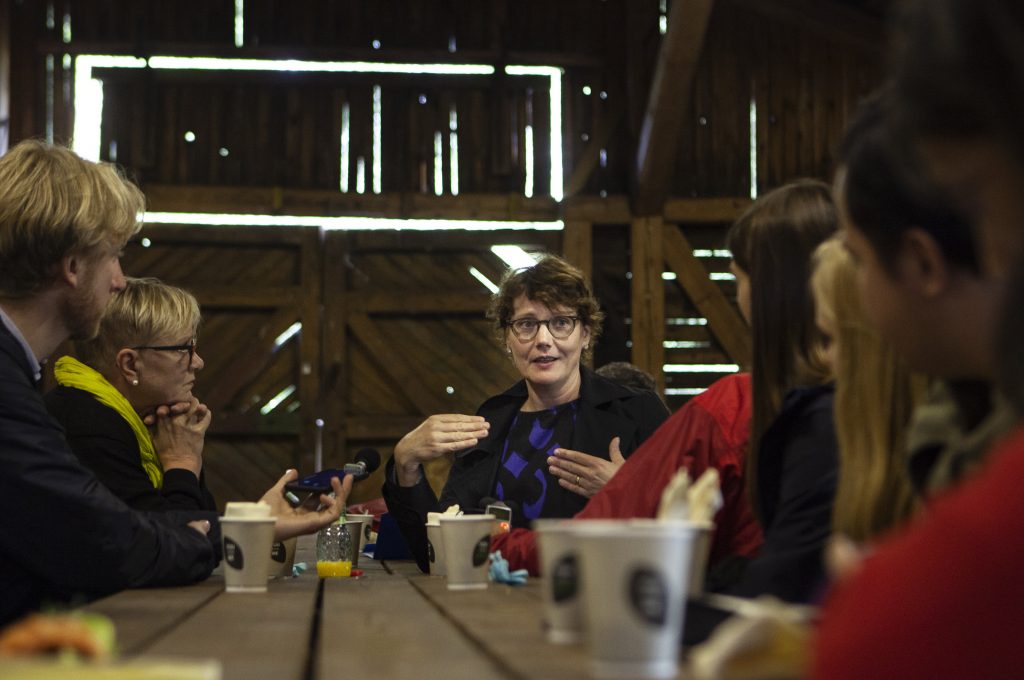 One of the two head curators of Helsinki Biennial, Taru Tappola (right), talking about the Biennial’s curatorial concept with an international group of journalists. Photo: Maija Toivanen.

Public art is playing an increasingly important role around the world. Art has become more commonplace and available to all, which explains its growing popularity: public art is part of our daily lives and does not require museums. People become fond of public works of art, and events and happenings are organised around them.

“Helsinki is acquiring more and more public artworks. Last year, 15 new works were completed and this year there will be even more. At the moment, we have 55 works going through our process. One reason for this increase is that new areas are being developed around the city and there are many modernisation projects underway, too,” Tappola says.

The artworks at metro stations are a good example of art that passengers can enjoy on their daily commutes. You can also easily visit artworks on your evening walk. Increasingly often, art is also something unexpected.

“Today, public art is much more than just sculpture and paintings. It can also be performative, such as an outdoor performance in a nearby park. Another new thing is that public art can be temporary, it doesn’t have to last forever,” Taru Tappola says.

HAM selects new public artworks through a curatorial process to which a suitable artist is invited. Tappola says that diversity is important: artists are Finnish and increasingly frequently also from abroad. They are sometimes young, sometimes more experienced and they come from varying professional backgrounds.

“When resources are available, we can also organise competitions. These are a great way of finding new artists.”

Tappola, one of the two head curators of Helsinki Biennial, is excited that the Biennial will also include new public art of a high quality. The Biennial is a public art event as such, because it will take place outdoors on Vallisaari Island, which is open to everyone. The Biennial will also be the backdrop for the premiere of several new works of public art that will be put on permanent display elsewhere in the city after the event. No works will remain on Vallisaari.

Read more: You can find a list of HAM’s public artworks and a map of their locations here.

The artists and artworks of Helsinki Biennial will be announced at a later date.